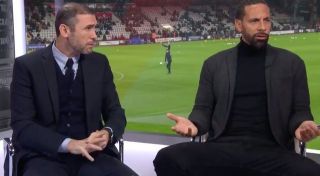 After Liverpool drew with Shrewsbury in their FA Cup fourth-round tie on Sunday, there has been a lot of talk about their apparent plan for the replay.

The fixture will be played at Anfield on either February 4 or 5, and as noted by BBC Sport, Jurgen Klopp has hinted that his first-team squad will play no part and he won’t even be on the touchline.

It is reported that Liverpool U23 boss Neil Critchley is expected to take charge for the replay.

A gesture of disrespect towards the oldest cup competition in world football?

Hopefully the game has a similar outcome to Liverpool’s League Cup clash against Aston Villa earlier this season — when Klopp was away with first-team members for the FIFA Club World Cup as Villa won 5-0.

Rio Ferdinand has suggested that Klopp not being in charge for the game is perhaps a step too far, as seen in the video below (via BT Sport):

“He’s taking a liberty in some ways if he’s not going to be in the dugout, that’s where I draw the line.”@rioferdy5 understands the needs for squad rotation for Liverpool but wants to see Jurgen Klopp leading his team at the replay. pic.twitter.com/siOVgVqyFl

Ex-Arsenal defender Martin Keown believes that Liverpool should show more respect to the competition, and to the players who will want to fight on all fronts this season.

If Liverpool get knocked out of the Champions League and risk their status in the FA Cup, they could have nothing to play for come the end of the season as the league title should be wrapped up by then.

We’re not complaining. We don’t really care — but Ferdinand is right, Klopp should be in charge of his team for their fourth round replay against Shrewsbury.