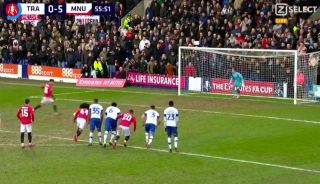 Mason Greenwood is the latest player to get in on the act in a Manchester United rout at Prenton Park this afternoon.

The 18-year-old star converted a penalty early in the second-half after Tahith Chong, a half time substitute, was felled in the box.

Greenwood took responsibility and and slotted home with ease with his right-foot, despite his preferred foot being his left.

He is known to take set-pieces with both his left and right foot, and this is another example of his ability with both feet.

United have now scored six from seven efforts on target in a clinical performance.

Harry Maguire, Jesse Lingard, Diogo Dalot, Anthony Martial and Phil Jones are also on the scoresheet for the Reds.