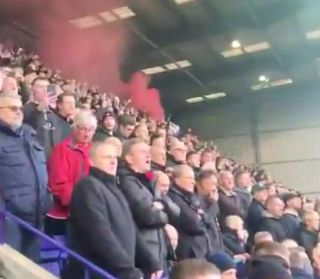 Harry Maguire opened the scoring with a stunning strike for his first United goal, before Diogo Dalot and Jesse Lingard gave the Reds a comfortable lead on a horrendous pitch against the League One side.

But the scoreline has not meant United fans have forgotten about the salient issue at this club.

Old Trafford collectively sang about their anger at the Glazers in the defeat to Burnley on Wednesday and the vociferous chants have retuned this afternoon.

See the video from the United away end below, as fans voice their exasperation of the greed and incompetence of our American owners.

A green smoke bomb let off and some green and gold scarves visible as United fans chant ‘Love United hate Glazers’ and ‘We want Glazers our’ #mufc pic.twitter.com/QTOa0wcCQp

Now it sounds like 'Every single one of f*****g hate Glazers'. #mufc