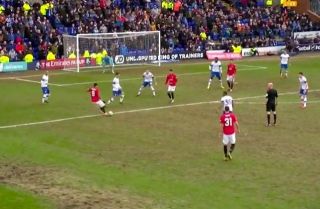 Anthony Martial has scored Manchester United’s fifth in a rampant first-half against Tranmere in the FA Cup fourth round.

Some had expected a tough afternoon for the Reds on a horrendous pitch at Prenton Park, but the Ole Gunnar Solskjaer’s men  have put their opposition aside with ease.

Harry Maguire’s stunning strike opened the scoring before Diogo Dalot, Jesse Lingard and even Phil Jones got in on the act.

Then Martial, the only regular goalscorer to have his name on the scoresheet, netted the fifth.

The Frenchman’s brilliant curled effort from outside of the box was slightly deflected in on the stroke of half.

See his goal below, courtesy of Z Select: