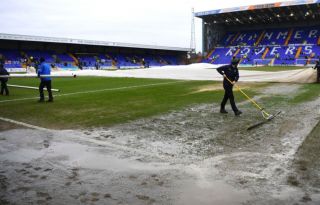 The main talking point surrounding Manchester United’s FA Cup fourth round tie against Tranmere this afternoon is the state of the Prenton Park playing surface.

Tranmere’s pitch, also shared by Liverpool Women, is in horrendous condition and there have been sand and rollers used before kick off in an attempt to improve the swamped surface.

While there should be no excuses for a Manchester United side boasting plenty of quality this afternoon, the Reds are certainly at a disadvantage with these conditions.

League One strugglers Tranmere beat Watford at home on Thursday evening in similar conditions to set up this clash.

There are concerns among supporters that the pitch puts United players at risk of injury this afternoon.

Meanwhile, Ole Gunnar Solskjaer has made six changes to his United starting eleven.

Sergio Romero, Diogo Dalot, Victor Lindelof, Jesse Lingard, Mason Greenwood and Luke Shaw all return to first-team action in what appears to be a five-at-the-back set up.

Anthony Martial will again start in attack will Angel Gomes left out of the squad entirely.

See photos of the pitch below, courtesy of BBC Sport, and some United fans reaction.

The pitch at Tranmere looks like it was put together by Edward Scissorhands.

This is the pitch that Manchester United will be playing on today. Obviously not ideal, but Tranmere are playing on the same pitch too so really there shouldn’t be any excuses. Spurs beat these lot 0-7 last season too, so again, no excuses. pic.twitter.com/IzTguVqYBq

Tranmere are 21st in League 1 and have the worst pitch we’ll play on this season. So Solskjær has chosen to play a Premier League level side. https://t.co/cUC3OTWKeT

Growing up, we would play at our school field which had rubbish drainage on the left side. We hated playing that side & Iremembered once when I ran with the ball, having my foot sink into the mud which then swallowed my Lotto boot.

Tranmere's pitch reminded me of that

Jesus my fucking back yard is in better nick than that tranmere pitch.

That Tranmere pitch is horrendous

Injuries on that pitch at Tranmere today???