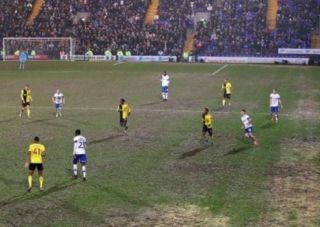 United face a side struggling in League One in what should be a relatively routine progression into the next round of the competition.

However, Tranmere defeated Watford in extra-time on Tuesday to set up this clash and there has been concerns around the conditions of the playing surface.

But Mellon categorically denied claims that United were at a disadvantage in the tie.

“People get confused and think they’ve got to play on a different pitch. We’ll play on the same pitch,” Mellon said, as quoted by BBC Sport.

“What if it’s windy? What if it’s hailstones? Good players can adapt and adjust to anything, that’s what you expect of them.

“They know what the outcome has got to be and that’s got to be trying to win a game of football and good players will find a way of doing that on any surface.

“For every football manager, I know how tough it is, regardless of where they are and what their situation is. We have different challenges and it’s tough for everybody.”

United will have to adapt to playing on such a poor surface, but the quality will surely shine through in Ole Gunnar Solskjaer’s side.

We don’t expect Solskjaer to risk making wholesale changes this afternoon as he has to prioritise victory and a defeat would spell disaster.

Also, due to the nature of his depleted squad, the United manager is short on first-team options to come in and provide other players a rest.

This is the pitch that Manchester United will be playing on today. Obviously not ideal, but Tranmere are playing on the same pitch too so really there shouldn’t be any excuses. Spurs beat these lot 0-7 last season too, so again, no excuses. pic.twitter.com/IzTguVqYBq