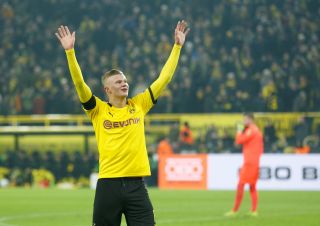 Erling Haaland came off the bench to score twice on a home debut to remember, making it five goals in two games for the Norwegian striker who decided to join Borussia Dortmund earlier this month, despite being in talks with Manchester United.

Ole Gunnar Solskjaer says United had to defend their own interests when negotiation a transfer for Haaland, after the teenager’s 23-minute hat-trick on his Dortmund debut.

Old Trafford looked a likely destination for the 19-year-old not long ago, but no matter what PR spin Ed Woodward wants to throw on this, United have been left red-faced with Haaland immediately taking to life in the Bundesliga.

A worrying stat has emerged from journalist Richard Jolly, who claims Haaland has scored more league goals than United in 2020 (5-4), despite playing only 57 minutes of competitive football.

It was claimed at the time that United had backed out of the deal for financial reasons, rather than having offers rejected by Red Bull Salzburg or the player himself.

“It is important that we use common sense,” Solskjaer told reporters on Tuesday (via Bleacher Report). “There are other things too when you sign players, that you have to keep in control. You can’t give agents the control by giving buyout clauses and stuff.

“That has been touted around, that is for me, we have to be in control.”

Meanwhile, Solskjaer is more desperate than ever to sign a goalscorer following Marcus Rashford’s long-term injury. United are in trouble and time is running out in the January transfer window.

Check out Haaland’s brace from Friday night (via BT Sport):

This is getting ridiculous! 😂

5️⃣ goals for Dortmund and he hasn’t even played 90 minutes of football for them yet! 👏👏👏 pic.twitter.com/qxe7r9tUvF