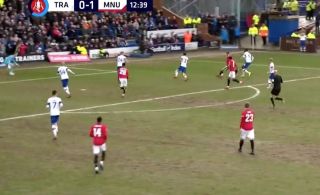 Manchester United are three goals up after 15-minutes against Tranmere in the FA Cup fourth round.

The quality is proving too much for our opponents, and it’s been quite some time since we’ve been able to say that about a Man Utd performance.

Harry Maguire opened the scoring with an absolute belter from outside the box. Not bad for a centre-back who has yet to score from his head in a United shirt.

Diogo Dalot scored the second for the Red Devils — his first for the goal, which you can see below courtesy of Z Select Live:

A third goal quickly followed as Maguire drove out of defence and led the team forward.

The centre-back found Jesse Lingard in a good position before his England teammate increased United’s lead with an effort from outside the box.

Come on United, tie in the bag now!