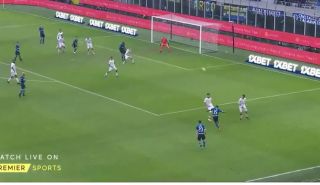 Ashley Young made a switch to Inter Milan earlier this month.

The 34-year-old will be a loss to the dressing room, but we’ve seen his best years at Old Trafford.

Some argued that it wasn’t a good time to lose Young, with Ole Gunnar Solskjaer’s negatively impacted by an injury crisis.

However, Young looks to be enjoying himself in Italy, providing an assist on his debut against Cagliari.

Watch below (via Premier Sports TV) as Young plants a cross straight on Lautaro Martinez’s head.

Ashley Young is playing as a right wing-back in Antonio Conte’s side, as per Live Score.

His versatility and experience could go a long way in Inter’s bid for Serie A success as they challenge last season’s champions, Juventus, for the big prize in Conte’s first season — a feat previously accomplished in his first season as manager of Juve and Chelsea.

We hope to see the same standard of deliveries into the box later today when Man Utd take on Tranmere in the FA Cup.