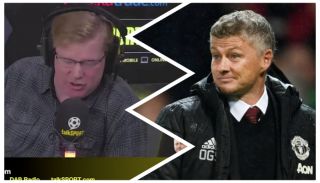 Ole Gunnar Solskjaer is not the right man to rebuild Manchester United and make us a successful force once again, according to talkSPORT’s Adrian Durham.

United’s 2-0 defeat at home to Burnley on Wednesday night was a new low for Solskjaer’s side, who had suffered a 2-0 loss against Liverpool in their previous outing.

Solskjaer is partly responsible for United’s worst-ever season in the Premier League — after 24 matches played. He enjoyed a fairytale start in the Old Trafford hotseat, but since being handed the full-time job back in March things couldn’t have gone much worse.

READ MORE: Solskjaer insists Man Utd are working on one or two things ahead of transfer deadline

Durham of talkSPORT believes enough is enough and United must now search for a new manager to get the club back on track.

“He was the manager of Molde.”

“#MUFC have got the man who took Cardiff down.” ⬇️

Strong words from @talkSPORTDrive, who has his say on Ole Gunnar Solskjaer. pic.twitter.com/pgLIIrRKw8

Durham said on Thursday night’s Drivetime: “He has taken Cardiff down. He was the manager of Molde. City have got Pep. Liverpool have got Klopp.

“Man United have got the man who took Cardiff down. If they appoint a good manager with a good CV I don’t know if it will take them up to where City and Liverpool are, but what I do know is that it’s not going to work with this manager.”

But surely those who want Ole out can accept that he isn’t the only one to blame. The problems existed before he became manager and previous managers have had problems with the club’s executive vice-chairman Ed Woodward.

We think Solskjaer is out of his depth at United, but what does replacing him achieve when the next manager will be dealt the same cards?

Durham adds: “There are other areas of the club that need addressing of course, but come on everyone has got two be honest here. Club legend, yes, but it just isn’t working.

“When he doesn’t prepare the team properly for Burnley, surely we must all see what is right in front of our eyes?!”