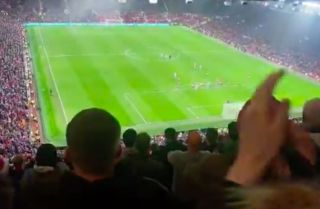 The whole of the Old Trafford faithful was on it’s feet in the second-half of United’s defeat against Burnley.

But not because of anything noteworthy was happening on the pitch. Ole Gunnar Solskjaer’s side lost 2-0 in a flat performance as they yet again failed to capitalise on Chelsea’s inconsistencies in the top four.

And the loudest chants of the night were directed at the Glazers and Ed Woodward.

There is an understanding among Reds that Solskjaer may not be the man to lead the club forward in the long-term, but he certainly has the best interests at heart.

Meanwhile, the board’s incompetence is quite staggering and we are now seeing fans vent their anger inside the stadium.

Solskjaer needs significant investment in his depleted squad but it looks like the club are no closer to making a signing with just a week of the transfer window remaining.

See the chants below, courtesy of Optus Sport and Reds inside the ground:

"Stand up if you hate the Glazers…" 🎶

The Manchester United faithful send a message to the club's owners after during the Red Devils' 2-0 loss at home to Burnley. #PL #OptusSport pic.twitter.com/NYQ8spLP29

Stand Up If You Hate Glazers #mufc pic.twitter.com/v5I303NsrK

🎶 STAND UP IF YOU HATE THE GLAZERS 🎶