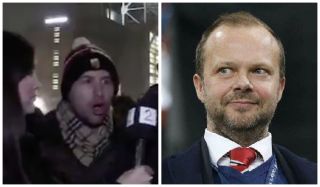 Ed Woodward was subject to criticism from most Manchester United fans at Old Trafford on Wednesday night, after the team’s loss to Burnley, and one fan dropped the ‘C’ word on live television.

We feel he was being nice…

There was little doubt who United fans blamed last night for the struggles this season. After years of shocking recruitment and bad calls, what we are seeing now is a result of sheer incompetence from the Glazers and their puppet Ed Woodward.

One fan took his anger out by interrupting a live interview on foreign television to call Woodward a C U Next Tuesday.

Woodward became executive vice-chairman at Man Utd in 2013 when David Gill left the club the same summer Sir Alex Ferguson retired. The club has nosedived since then and there is nothing to suggest things will improve anytime soon.

With Scott McTominay, Paul Pogba and Marcus Rashford all out with long-term injuries, the lack of recruitment falls on Woodward. Ander Herrera and Marouane Fellaini both left the club last year and neither has been replaced.

The squad is thin and it sounds like Woodward is doing nothing to help Ole Gunnar Solskjaer. That may suggest the Glazers are tightening the purse strings again.

What would you say to Woodward if you had 10 mins with him? Send your replies to @StrettyNews on Twitter and we’ll retweet the best ones.