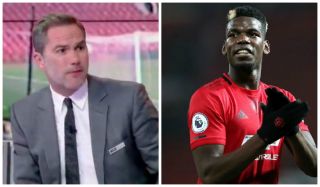 Paul Pogba wasn’t even on the pitch as Manchester United lost to Burnley — and yet still got an earful from former footballer turned pundit Jason McAteer.

While the Red Devils were abysmal as they fell to a 2-0 defeat at home to Burnley on Wednesday night, there were many bad performers who should have been in the firing line ahead of a man who has only played twice since September.

McAteer laid into Pogba as a bad influence before comparing United to lead leaders Liverpool.

The 48-year-old told BeIN Sports after the game: “I don’t get Paul Pogba, he doesn’t fit into Manchester United.

“I don’t get Paul Pogba… He just upsets the dressing room. He has too much influence on the younger players.”@MCATEER4 knows who to blame for #MUFC‘s demise. #beINPL #MUNBUR

“Sir Alex Ferguson got rid of him in the first place, there’s a reason why he did. But they bring him back.

“It is commercial? Did they bring him back commercially because to me he just upsets the dressing room.

“He’s got too much influence on the younger players, that’s not what you want – you want James Milner and Jordan Henderson and Adam Lallana, those players in the dressing room.

“They were driving the young players forward, they were saying this is how you live your life. If you want to win Champions Leagues and Premier Leagues then you live like this.

“Because Jurgen [Klopp] can’t be in that dressing room all the time.

“You need players inside the dressing room who do the right things, Manchester United don’t have that.

“Don’t get me wrong they’ve got some fantastic kids; Greenwood, Rashford, Williams, that need guidance from senior professionals.

“And they don’t have a leader running the ship. Ole Gunnar Solskjaer is not the man.”

How does McAteer know what influence Pogba has on the young players? How does he know what the Frenchman is like in the dressing room?

It’s easy for ex-Liverpool players to sit back now and boast about how everything is falling into place for them, and we don’t need them telling us! They’ve gone 30 years without a league title which only suggests that they’ve had big problems over their own.

We must overcome our own problems— with or without Pogba.