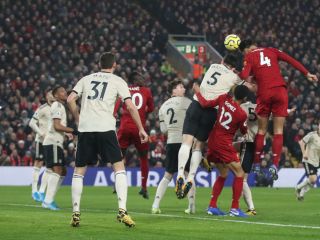 The chant uttered at Anfield directly after Mohamed Salah’s goal put Sunday’s game beyond any doubt will last long in the memory for United fans. Personally, being 27 at the time of writing, they’re words I had never heard with such conviction, from Liverpool fans at least.

Words I thought I’d never have to endure – ‘we’re gonna win the league’. Make no mistake, they are going to win the league – and they’re going to make sure everybody knows about it too. A thought then occurred to me that, in the event United go as long without a league title as Liverpool have to this point (30 years), there won’t be another one to celebrate until I’m 50. That is scary to even have to consider. Though, with the level of ineptitude displayed in the last seven years showing no signs of dissipating, it’s not completely out of the question.

It doesn’t take much realise there is a significant gulf between the clubs currently, both on and off the field. Just look at the league table, where a 30-point chasm now exists. That was the overwhelming takeaway from the game for most, despite it not being reflected in the final scoreline.

After an initial bright start, Virgil van Dijk strolling into United’s box to score more-or-less unchallenged from a corner came as no real surprise. United’s zonal marking policy has often been our undoing and has led to the concession of eight goals from set pieces this season – the joint highest in the Premier League. Why has this not been worked on, or even ditched? One wonders, like with so many other things going on at the club.

United did have chances during the 90 minutes, most notably when Andreas Pereira failed to make a proper connection with Aaron Wan-Bissaka’s cross just before half time – and when Anthony Martial blazed over from close range in the second half. However, this was only after a sustained spell at the start of the second period where United could barely get out of their own half, such was the level of Liverpool dominance. Harry Maguire and co continuously attempted to play out from defence to no avail, often resorting to launching the ball into the opposing half for some respite.

Liverpool are a good and well-coached enough side without playing directly into their hands, that would apply to any of the great United sides of the last 20 years – never mind the current one.

On a day of few positives, Fred was by far in a way United’s standout performer. The Brazilian was tireless in his efforts to help salvage a point, and there were times later in the second half when he ran the midfield. Brandon Williams again put in another assured performance, this time at left-wing back, again underlining the rationale behind allowing Ashley Young to leave for Inter Milan. But if you were really clutching for a third United player to emerge with some credit, I would point to Luke Shaw deployed as an unfamiliar third centre back. That, however, might be overshadowed by the sight of him going down with cramp in the closing stages. An all too regular occurrence for Shaw, and symptomatic of someone who just isn’t in the physical shape to be a consistent top-level performer for United.

Andreas Pereira, Nemanja Matic and Victor Lindelof to name just three, are illustrative of the dearth of quality at Old Trafford. Even David de Gea looks a shadow of his former self. Mistakes have crept into his game, and the secret is well and truly out regarding his weakness under a ball high and failure to command his penalty area. The lack of quality in the squad is obviously a consequence of post-Fergie squad mismanagement – but Ole Gunnar Solskjaer is not without blame.

The spate of injuries to key players which has blighted United’s season and left a threadbare squad could have been compensated for, had the manager been more forceful in ensuring reinforcements were bought in the summer. Not being backed sufficiently in the transfer window is one thing, but flogging key players whilst injured is an entirely different matter. United’s star performer this season, Marcus Rashford, now faces potentially 2-3 months on the sidelines with a double stress fracture in his back. Make your own jokes about Rashford carrying the team, but allowing it to happen is reckless in itself. Similar tales of playing whilst injured can be found in the cases of Scott McTominay, Harry Maguire and even Paul Pogba – despite a great deal of scepticism around the Frenchman.

Living from one game to the next, as has often been the case following notable United defeats this season, has again been on the agenda since the first half humiliation against Manchester City in the Carabao Cup semi final. Whilst Ole has been steadfast in stating that he’s managing for the long term and has the backing of the United board to implement the ‘plan’ devised – prioritising a place in the fourth round of the FA Cup and thus jeopardising the health and wellbeing of your best player this season suggests otherwise.

One constant throughout his tenure is the backing for Solskjaer from ex-United members of the punditocracy; namely Gary Neville and Roy Keane. Each of whom are, of course, former teammates of the United manager, meaning their public utterances must be viewed in light of that. Despite the words United fans had to hear the Kop sing on Sunday, it is perhaps one word that Sky presenter Dave Jones used to question Keane’s view that his former colleague should be afforded more time in the hotseat – ‘why? – that is more pertinent. The Corkman’s answer was ‘why not’, and that is simply not a sufficient reason to keep any manager in a job. It’s whether the United hierarchy realise this, or indeed care enough to act that will determine just how long the wait for our next league title will go on. Don’t hold your breath.