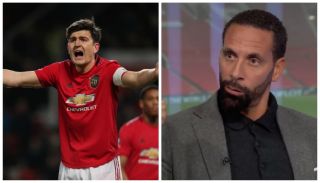 It was a disappointing night at Old Trafford and Rio Ferdinand has let out some home truths on BT Sport.

This will come back to haunt us at the end of the season when we need additional points to clinch fourth place.

Ferdinand sat in the BT Sport studio alongside ex-Premier League striker Peter Crouch. The pair were critical of United’s recruitment in recent years, as seen in the video below:

“If you’ve been doing your recruitment right you wouldnt have to rely on kids.”

“How have you let Lukaku go and Sanchez go? And not have anyone to replace them…Martial flatters to deceive.”@petercrouch and @rioferdy5 have not been impressed by transfers at Old Trafford 😡 pic.twitter.com/ZoCOEWxFPU

The former United centre-back has called on Maguire to step up as one of then more experienced players in the dressing room, and that’s part of the responsibility he took when accepting captaincy.

Crouch doesn’t understand how the club could let Romelu Lukaku and Alexis Sanchez leave without getting replacements in.

As an outsider, he’s probably unaware that Lukaku forced his way out, and that United are doing all they can to get Sanchez off their books.

The hope for Sanchez is that he impresses between now and the end of the season in Milan, so that Inter take him on a permanent basis.