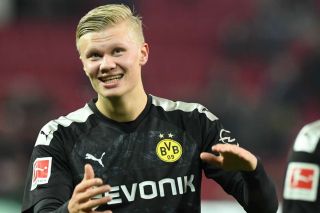 Erling Haaland to Manchester United transfer rumours were doing the rounds for some in 2019. The Norwegian striker ultimately ended up at Borussia Dortmund after leaving Red Bull Salzburg at the start of January — with Ole Gunnar Solskjaer now explaining why he didn’t end up at Old Trafford.

Despite his side being short of forwards due to Marcus Rashford’s long-term injury, and Haaland scoring a hat-trick on his Dortmund debut, Solskjaer reveals he did not want to bow to his agent’s demands.

This is interesting, of course, with Mino Raiola being Haaland’s agent and the fact he also represents Paul Pogba, who has been linked with a move away for some time.

Pogba has been linked with a transfer to Real Madrid next summer, although the Daily Mail claims that could now be off due to of Fede Valverde’s significant impact in the first team.

“It is important that we use common sense,” Solskjaer said (via GOAL). “There are other things too when you sign players, that you have to keep in control. You can’t give agents the control by giving buyout clauses and stuff.

“That has been touted around, that is for me, we have to be in control.”

It had been reported that Man Utd had concerns over signing Haaland because of Raiola, as per the Irish Mirror, and we wonder what that could mean for Pogba’s future at the club?

We shouldn’t forget the need for a striker right now. Even with Rashford scoring 19 goals in all competitions this season, the Red Devils lacked a proven goalscorer.

Haaland proved himself on Europe’s biggest stage (the Champions League) this season.