Manchester City were awarded a penalty in the 35th minute in last night’s Premier League clash with Sheffield United.

City winger Riyad Mahrez was brought down in the box before the referee pointed towards the penalty spot.

Gabriel Jesus stepped up to take the spot-kick and his attempt failed to trick Manchester United loanee Dean Henderson, who parried the penalty away. He has now saved 7 of the last 10 penalties he has faced.

Check out Henderson’s penalty save below, footage courtesy of BT Sport:

If you watch closely you will see Henderson come off his line, so the penalty should have been retaken. 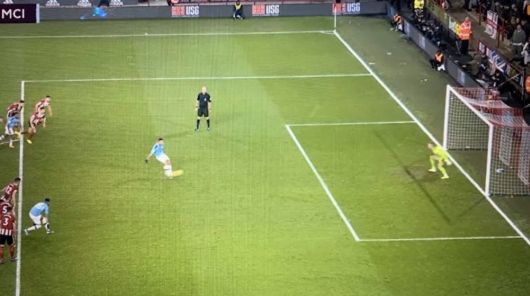 VAR, however, was nowhere to be seen.

A charge for the title still looks unlucky for Pep Guardiola’s side, as Liverpool run away with it.

Man Utd fans reacted to the penalty save on Twitter, as seen below:

DDG last saved a penalty in 1933. Get Deano in asap

🏴󠁧󠁢󠁥󠁮󠁧󠁿 Dean Henderson deserves to be England’s Number 1 for the Euros this summer!

Of the 15 goalkeepers that have made 50+ saves in the Premier League this season, Dean Henderson has the highest save percentage (74.32%).

The future of Manchester United and England #mufc pic.twitter.com/H6zqTcDLUp