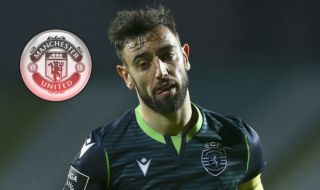 The Portugal international has been long linked with a move to Old Trafford, after different sources seem to have different information on what is happening behind the scenes.

The latest from A Bola in Portugal claims Man Utd have submitted a new offer worth a total of around £55m for Fernandes — including £10m add-ons.

It remains to be seen if Sporting will accept this offer because A Bola don’t give much detail on what might happen next.

Meanwhile, the Daily Mirror reports there’s been a breakthrough in negotiations. That suggests United know what Sporting want and the latest offer should really be enough to get the deal over the line.

The playmaker should glimpses of frustration last night as Sporting lost 2-1 against Braga. As he left the pitch at full-time, Fernandes shoved the TV camera and didn’t look very pleased.

Fernandes could be an important addition to Ole Gunnar Solskjaer with the Red Devils craving more creativity in the middle. Moreover the recent injury to Marcus Rashford — potentially ruling him out for the rest of the season — will definitely hit the squad as he’s our top scorer this term with 19 goals across all competitions.

The 25-year-old Sporting ace has plenty of quality in his locker. A creative player with a keen eye for goal, as shown with consistency over the last two seasons.

There’s no denying that this would be a huge step up for Fernandes, but he will feel he warrants a big move at this stage of his career, and hopefully it happens this month.