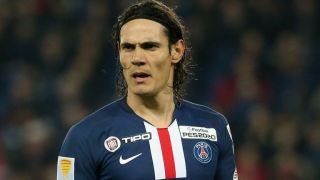 Manchester United could miss out on the transfer of Edinson Cavani as his father claims he’s given his word to Atletico Madrid.

The Paris Saint-Germain striker’s future is in major doubt at the moment, and we recently ran a piece suggesting that he’d be a good short-term option to come in and score goals with Marcus Rashford possibly out for the remainder of the season.

Moreover, the Manchester Evening News has published a transfer report on Cavani linking him to United.

There has been an update via El Chiringuito, as translated by Sky Sports, with Cavani’s father saying that he thinks it’s most likely his son will join Atletico, as he’s already given them his word about a move.

“He wants to join another club in Europe. That would please me that he plays here [at Atletico], yes,” Luis Cavani said.

“[Diego] Simeone wants him now. The head coach of Paris Saint-Germain has also said he needs him to compete in the Champions League.

“But PSG do not want him to go to Atletico Madrid if he finds an agreement.

“I think there is a strong chance he will go to Atletico, the option to join the club always remains in June. There are lots of other clubs but when you give your word to a team, you respect it.

“If tomorrow, he is available and Atletico still want him, I think he will sign.”

This is bad news for United with the club in dire need of a goalscorer.

We have our thoughts on Cavani and the influence he could have on the current crop at United.

He’s a proven goalscorer wherever he’s been and could lift the Old Trafford dressing room just like his ex-teammate Zlatan Ibrahimovic did in 2016.

Update from The Sun: Cavani has been left out of PSG’s squad for the third game running. The striker will now miss out on their Coupe de la Ligue semi-final against Stade Reims tonight.