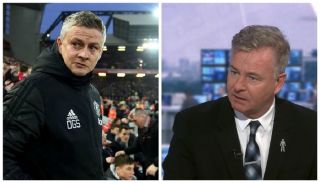 Following our defeat to Liverpool, Nicholas thinks there will be another bump in the road for Man Utd, who sit fifth in the Premier League with 34 points.

United need to start showing more consistency in the league if they’re to finish in a Champions League spot. We should be picking up three points against Burnley without any problems, but you can see why the Sky Sports pundit has his doubts.

While Ole Gunnar Solskjaer’s side beat Burnley 2-0 when both teams met at Turf Moor, Nicholas is of the opinion that tonight’s game will be a draw.

In his column for Sky Sports, the former Arsenal man wrote: “How do we work out Burnley? They are average at best but managed to drag out a result against Leicester. Sean Dyche demands passion and commitment from his team, but this was always the fabric of what Burnley were good at. What is their reaction to the big clubs? What are we going to see and what are we going to get? This is why they are in and around the bottom three.

“Man Utd were awful but came into it in the last 20 minutes against Liverpool. They probably did better than a lot expected. I think Burnley can go there and upset them. Chris Wood scored his goal and then Ashley Westwood nicked it against Leicester. I see an awkwardness around this once again.”

Burnley haven’t been good this season and sit 14th in the Premier League stands. They’re far from safe and hopefully tonight we make matters worse for Sean Dyche’s side.

The Clarets haven’t beaten United since 2009 and we won’t see that changing tonight!

United will be without Marcus Rashford, who could miss the remainder of the season, but Solskjaer still has a squad capable of beating Burnley.