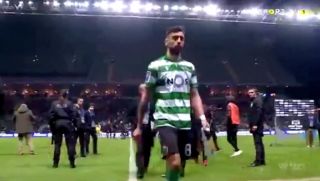 Bruno Fernandes raised one or two eyebrows with his antics at the end of Sporting Lisbon’s defeat to Braga last night.

The Portugal international was not happy with the 2-1 defeat in what might be his Sporting farewell as transfer rumours linking him to Manchester United continue to intensify.

The Daily Mail are among the publications to state that Fernandes to Man Utd seems to have reached a breakthrough, but for thd time being he doesn’t look very happy.

Watch the video below as Fernandes storms off at the end of the defeat to Braga, failing to acknowledge the club’s fans and shoving a TV camera.

Bruno Fernandes doesn’t wave goodbye to the fans, but instead punches the camera in the tunnel.

We don’t actually know what Fernandes is annoyed about. It could be Sporting’s defeat, his transfer to United being dragged on, or maybe he thought the cameraman looked like Ed Woodward.

We just hope he can get to Old Trafford and put last night’s disappointment behind him, though Sporting are having a similar league season to us!