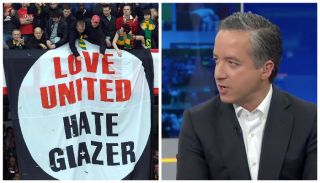 Sky Sports reporter Kaveh Solhekol has given a frank assessment of the ownership structure at Manchester United and its affect on the team.

Solhekol starts by claiming Tottenham Hotspur have a better stadium, training ground and squad than the Red Devils.

This is all used against United as proof they’ve fallen behind on and off the pitch.

It’s no wonder how all of this has happened. Solhekol notes that more than £1billion has been taken out of the club.

During the same period, Chelsea and Man City have had that money and invested £1b+ in the transfer market, with a better success rate thanks to better recruitment strategies.

That was always going to catch up with us.

Watch the clip below (via Sky Sports) as Solhekol claims “Both on and off the pitch, Manchester United have fallen behind their rivals.”

🗣 "Both on and off the pitch, Manchester United have fallen behind their rivals."@SkyKaveh delivers a frank assessment of the ownership structure at Old Trafford and its affect on the team's success.