Ole Gunnar Solskjaer does not have the luxury of making many changes to his Manchester United side that were defeated by Liverpool at Anfield on Sunday.

The Reds face Burnley at Old Trafford on Wednesday evening, just three days after the 2-0 defeat against the runaway league leaders.

Despite such a poor season, United remarkably still sit in fifth position, largely down to the inconsistency of the teams around them. Solskjaer’s side can keep tabs on Chelsea in the Champions League places if they can return to winning ways against the 14th placed side.

Burnley, meanwhile, will be high on confidence after Sunday’s 2-1 win against Champions League hopefuls Leicester and will come to Old Trafford with no fear.

We expect Solskjaer to revert to a back four after the five-at-the-back formation against Liverpool. Brandon Williams deserves to retain his place at left-back, but Victor Lindelof is a fitness doubt after returning early from training on Tuesday morning through illness.

Although Lindelof has been poor over the last few weeks, his absence would mean the likely return of Phil Jones with Eric Bailly not yet fully match-fit and Axel Tuanzebe and Marcos Rojo still sidelined through injury.

We hope the Swedish international is fit enough to start alongside captain Harry Maguire at centre-back.

Fred and Nemanja Matic will continue in the midfield pivot with Solskjaer bereft of options in the centre of the park.

Juan Mata should return to the starting eleven; the Spaniard was unlucky to miss out against Liverpool after impressive performances against Norwich and Wolves.

His creativity and quality on the ball could provide a much needed cutting edge for the Reds against a defensively minded Sean Dyche system at Old Trafford.

Meanwhile, with Marcus Rashford ruled out for up to three months with a double stress fracture in his back (Telegraph), Anthony Martial could take his place on the left-flank.

We all know how dangerous Martial is running at full-backs from the left so this selection wouldn’t be a concern, but Solskjaer’s squad is seriously thin in attacking options.

Martial on the left would pave the way for Mason Greenwood to start as striker. The 18-year-old has scored 9 first-team goals this season and the responsibly for goals will, rather unfairly, largely fall on his shoulders if United fail to sign a striker this month in Rashford’s absence. 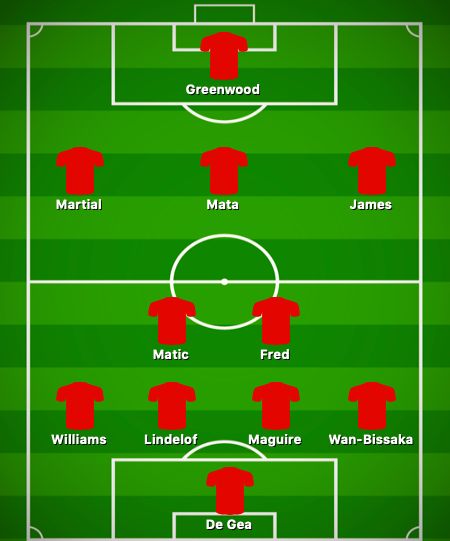