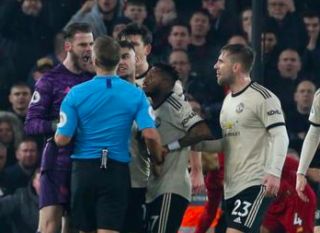 Manchester United have been charged by the Football Association for ‘failure to ensure the players conducted themselves in an orderly fashion’ in the 2-0 defeat to Liverpool at Anfield on Sunday.

Ole Gunnar Solskjaer’s side were unsurprisingly well beaten by the runaway league leaders, as Liverpool stretched the gap between the two clubs to a staggering 30 points.

Goals from Virgil Van Dijk and Mo Salah ensured yet another victory for Jurgen Klopp’s side who now seem to be strolling towards their first title in 30 years.

And the Reds have been charged for their furious protests after Roberto Firmino doubled the Liverpool lead in the first-half, a goal which was eventually overturned by VAR.

David De Gea was fouled by Virgil Van Dijk in the build up to Firmino’s strike, but referee Craig Pawson allowed play to carry on much to the frustration of United players when the ball did find the back of the net.

The Spaniard, captain Harry Maguire and Andreas Pereira all confronted the referee over the decision, and after a VAR review, Pawson was deemed to have made the wrong call.

“Manchester United has been charged with a breach of FA Rule E20 (a). It is alleged that the club failed to ensure its players conducted themselves in an orderly fashion during the 26th minute of the Premier League fixture against Liverpool FC on Sunday.”

United have a Thursday deadline to respond to the charge.