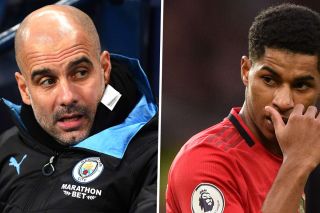 England strikers Harry Kane and Marcus Rashford are facing battles to prove their fitness ahead of Euro 2020 after suffering serious injury setbacks.

Pep Guardiola says the football authorities are ruining England’s chances of success at Euro 2020 — because of the hectic fixture schedule.

Manchester United’s Marcus Rashford sustained a double stress fracture of his back, while Tottenham’s Kane suffered a ruptured tendon in his hamstring which required surgery.

The Telegraph claims Rashford could be out for up till three months.

Man City boss Guardiola believes the FA and the Premier League only have themselves to blame for the high-profile injuries — because of the fixture demands they set for footballers in the country.

Guardiola says players can break down when they are required to play too many games. He also called for the Carabao Cup to be scrapped, despite City looking to make it three triumphs in as many years this season in the competition.

“I’m so sorry for Kane and Rashford, but we demand a lot from the players, it’s too much,” said Guardiola (via Mirror).

“The players deserve to be treated as they should be, so they perform as well as possible.

“It’s unsustainable. The players fall down. It\’s too much. They [the authorities] should reflect on it but all the managers complained about it and they don’t care.

“The players suffer. We push and push, but the body says stop, it’s enough. Of course it’s too much to expect.

“The players arrive at the Euros, playing with the national teams, trying their best, then back here after no more than 20 days because the business, the show must go on.

“With that number of games, players break down. I’m not surprised. I’m so sorry for them.”

Guardiola went on to suggest scrapping the Carabao Cup entirely to help ease the fixture burden on players.

Asked if it would solves the issue if Premier League teams left the competition, Guardiola replied: “But then it wouldn’t be interested. It would just be for the Championship teams or League One and League Two.

“Eliminate competitions, take them out completely — so less games.

Guardiola has been known to have rested Raheem Sterling in recent weeks and is understandably wary of his star player picking up an injury of similar significance.

One would think this might give Mason Greenwood a greater chance of going to Euro 2020.