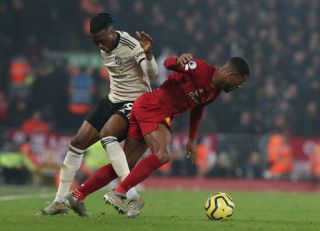 Manchester United legend Gary Neville has criticised the performance of Aaron Wan-Bissaka in the defeat to Liverpool at the weekend.

The young right-back has generally been solid since his summer transfer to Man Utd from Crystal Palace, but the trip to Anfield was undoubtedly one of the harder tests he’s faced in his career to date.

Liverpool were deserved winners, winning 2-0 in the end, and it could have easily been more.

Poor defending left United down for the first goal as Virgil van Dijk was allowed leap into the air uncontested, with Harry Maguire getting closest to the Netherlands international, who initially targeted Brandon Williams inside the box.

Discussing Wan-Bissaka’s performance on Sky Sports, as quoted by the Daily Mirror, Neville was not very complimentary.

“Wan-Bissaka has had a good introduction at Manchester United,” he said. “But I remember I had a couple of games here [at Anfield] as a right-back where I though it was different level.

“I used to play against Arsenal with Cole, Henry and Pires and you felt like you were on the waltzers — he’s on waltzers, Wan-Bissaka!

“He’s spinning everywhere. He hasn’t got a clue what’s going on in this game at the moment. But the play from Liverpool down that side is outstanding, and this is a different level for that lad to cope with.”

Liverpool are on course to win their first league title in 30-years and are some way off competing with the Scousers.

There’s no point being outraged by a result everyone was expecting.

And Wan-Bissaka has shown enough potential this season to warrant a little bit of sympathy for his below average display against Liverpool. We’re all due an off day but Wan-Bissaka had a big challenge at Anfield.

Hopefully he deals with the occasions better when we play them again.