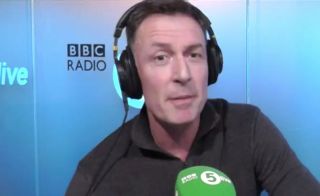 Times have changed and Manchester United fans must move on.

Former Chelsea star Chris Sutton believes Man Utd are living in the past and says Liverpool and Man City are in a different stratosphere.

He questions whether there’s really a ‘United way’ to play and urges the club to get over that hurdle and get with the times.

Ian Wright puts a lot of the responsibility down to Ed Woodward and says from a football perspective that United have fallen behind, which isn’t exactly news.

Some supporters are guilty of pining for the old formula that Sir Alex Ferguson was so successful with — winning thirteen Premier League titles, two Champions Leagues, five FA Cups and four League Cups during his time at Old Trafford.

Watch below as Sutton claims United are stuck in the past (via BBC 5 Live Sport):

Ole Gunnar Solskjaer currently has United 5th in the Premier League — and still in with a chance of winning a trophy in either the FA Cup, Europa League or Carabao Cup.

The Red Devils trail their Carabao Cup semi-final tie 3-1 against City, after an underwhelming first leg at Old Trafford two weeks ago.