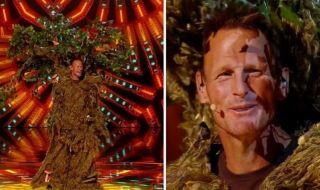 Teddy Sheringham is the latest celebrity to be unveiled on the ITV singing competition The Masked Singer.

The former Manchester United striker was revealed to be the performing tree after losing the sing off against the octopus!

I never thought I’d be writing the sentence above but it certainly goes down as a highlight in my day.

To make it better, or worse even, Sheringham sang Will Young’s Evergreen and Lovely Day by Bill Withers.

Watch as Sheringham is revealed as a performing three below (via The Masked Singer / YouTube):

Sheringham says that he chose to do the show for his children, as quoted by The Telegraph: “I’ve been asked to do everything over the years but always declined. I saw the show that aired in the States and though I’d love to do that for my kids.

“I’d love to wear the costume at one of my kid’s parties, that would be special.”

This didn’t get the coverage it deserved over the weekend, with Man Utd losing 2-0 against Liverpool, but watching Sheringham singing and dressed as a tree could brighten your morning ever so slightly.

Credit to the Treble winner for doing something he feels will make his children proud.