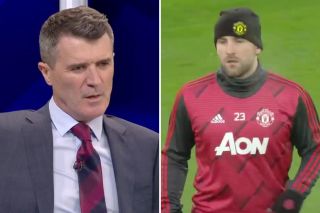 Although Manchester United lost the game 2-0, Roy Keane was optimistic about their chances against Premier League leaders Liverpool on Sunday.

The Irishman said on Sky Sports that it would not be a shock if United beat Jurgen Klopp’s side at Anfield.

“The word upset has been mentioned. Manchester United getting a result against Liverpool is not an upset. It’s Manchester United,” the former Man Utd captain said in the studio on Sky, as quoted by Yahoo.

However, Keane’s tune changed 25 minutes before kick-off as he saw a number of United players, including Luke Shaw, warming up whilst wearing a hat.

And that tipped Keane over the edge.

“When I see Shaw coming back into the team… the nearer we’re getting to kick-off, the more worried I’m getting,” he added. “I was fine about two hours ago.

We tend to agree with a lot that comes out of Keane’s mouth, except his views on Roberto Firmino’s disallowed goal yesterday, but imagine getting so wound up over someone warming up with a hat on.

Keane also hit out at Ole Gunnar Solskjaer and Harry Maguire’s pre-match interviews, saying, “I’ve heard Ole getting interviewed there and Maguire… it’s as if their mindset is they don’t want to get beaten. That’s negative talk already. I’m worried, I have to say.”

Keano continues to be hit on Sky Sports.