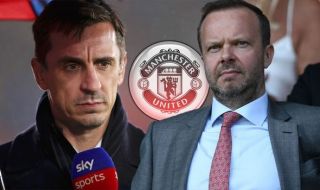 Enough is enough. Ed Woodward has done so much damage, it’s time to get rid.

Gary Neville has called for the Manchester United executive vice-chairman to be sacked for pressing over the club’s ongoing demise.

Man Utd are now 30 points behind rivals Liverpool in the Premier League following Sunday’s defeat at Anfield, and to make matters worse the Scousers on course to win their first league title in as many years.

The former United full-back reacted to the loss by suggesting Woodward, responsible for player recruitment and hiring and firing managers, should already have been replaced.

The businessman has spent over £950m on players since Sir Alex Ferguson retired in 2013 and is now on his fourth permanent boss in Ole Gunnar Solskjaer, whose position can’t be safe at the moment either.

Speaking on his podcast, Neville said the position United are in is “unforgivable” and claimed Woodward should pay the price.

“I’m struggling to understand why the ownership have persisted in trusting that management team to oversee the building of a Premier League title-winning team since Sir Alex Ferguson left,” said Neville (via the Mirror).

“Because if you don’t lose your job for essentially overseeing that investment, that wage bill, and putting that team out on the pitch then I have to say something is really wrong.

“I can’t believe the investment that’s been put into the squad in the last five, six, seven years and you end up with that out on the pitch.

“I saw a statistic two weeks ago that United have the second-highest wage bill in the world. And that’s the squad they’ve got. It’s unforgivable. It really is.

“There’s real talent in that executive team, they can create revenue, they can do things within the football club that can help to be fair.

“But in terms of what the club needed to do for a number of years now, is put the ‘best in class’ football operators into that club and they’re not doing it.

“They’re not doing it and it’s a mess. They need to sort it out – and quickly.”

There’s a lot of work required at United and sacking Woodward would be a good start.