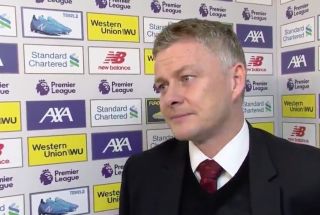 Ole Gunnar Solskjaer has explained his Manchester United lineup for this afternoon’s clash against Liverpool at Anfield.

The Reds face a huge uphill battle against the runaway league leaders, and have been dealt a further blow with the injury to Marcus Rashford.

Rashford was hauled off 16 minutes after coming on as a substitute in the midweek victory over Wolves, and has not recovered in time for today’s game.

Solskjaer said Luke Shaw is ready for such an occasion, despite rarely featuring this season.

Luke Shaw could start as one of three central defenders alongside Harry Maguire and Victor Lindelof, with Brandon Williams also in the starting eleven.