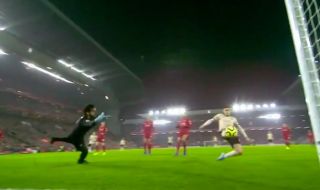 What a chance to equalise.

Manchester United won’t get many opportunities at Anfield this afternoon and Pereira has somehow missed the chance to level the scoring.

Virgil Van Dijk had given the home side the lead after 15 minutes following some shambolic zonal marking where Brandon Williams was left to compete with the big Dutchman.

United have held on to a one goal deficit, with Roberto Firmino’s goal ruled out for a foul on David De Gea in the build up.

And the Reds almost had their equaliser just before half-time. Anthony Martial played a fantastic through ball to Aaron Wan-Bissaka who found himself in behind the Liverpool defence.

The right-back squared the ball across to Andreas Pereira, who couldn’t get enough contact to convert the ball home.

Perhaps the midfielder would have been better off tapping into the empty net with his left foot.

See the chance below, courtesy of NBC Sports.