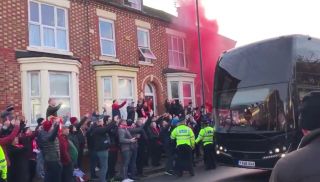 We’re all aware of Liverpool fans’ intimidating tactics for the opposition upon their arrival to Anfield.

Hundreds of scousers line the streets in anticipation, creating a famous atmosphere around the stadium an hour before kick-off.

The fans even take some of the credit for giving Liverpool a psychological edge in victories over Manchester City and Barcelona.

Some Liverpool fans did turn out to greet the Reds before kick-off, but the reception was anything but intimidating and many were recording United’s bus on their phones.

See the video below, plus some reaction from United fans.

Poor players have ptsd now, haven’t seen anything like this before.

This is so embarrassing