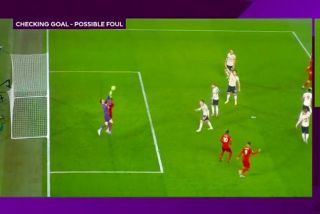 Manchester United started well in the first fifteen minutes against Liverpool, but are now at risk of being blown away by the runaway league leaders.

Liverpool opened the scoring through Virgil Van Dijk who somehow found himself free in the box.

Roberto Firmino had then appeared to double Liverpool’s lead with a wonderful curled effort.

However after some furious United protests and a VAR review, Van Dijk was adjudged to have fouled David De Gea in the build up.

The Liverpool defender put De Gea under pressure as he looked to claim a comfortable delivery.

De Gea was booked for his initial protests.

See the ruled out goal below, courtesy of NBC:

Liverpool scored, but it was overturned due a foul on De Gea by Van Dijk. pic.twitter.com/mxvOJYu5So