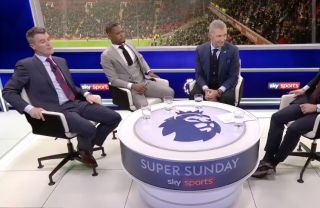 The Sky Sports punditry panel were in disagreement at Anfield after the referee blew the whistle for half-time.

But Patrice Evra seen sense to suggest otherwise because you cannot tackle the goalkeeper.

Virgil van Dijk was responsible for fouling David de Gea in the lead up to the goal.

Keane urged Evra to ‘wake up’ during his assessment of the foul.

Watch the clip below, courtesy of Sky Sports:

“How they see that as a foul is beyond me. The game has gone mad.”