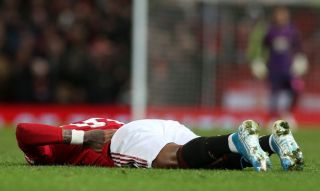 This is terrible news for Manchester United fans.

Arguably Ole Gunnar Solskjaer’s side’s best player this season, Marcus Rashford is expected to be ruled out for up to three months with a back injury.

The England international was brought off just sixteen minutes after coming on as a substitute in the second-half of the FA Cup replay against Wolves in midweek.

And according to the Times journalist Henry Winter, Rashford’s injury significantly worsened as a result of Wednesday’s appearance.

He could be out for two to three months, leaving United desperately short in attack options for a large period.

Surely United now have to bolster their attacking options in the remaining two weeks of the transfer window.Mason Greenwood, Anthony Martial and Daniel James are left as Solskjaer’s options going forward.

Rashford was carrying a single stress fracture in his back, now has a double stress fracture after Wolves game. Expected to be out for 2-3 months. Also has piece of floating bone in his ankle requiring non-intrusive surgery to remove. Been playing thru immense pain to help #mufc