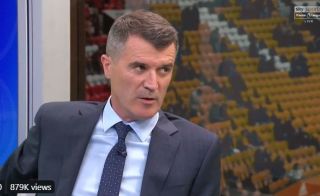 Former Manchester United captain Roy Keane has had his say on Harry Maguire recently being named as the new skipper.

The England international joined United from Leicester City in the summer, but has quickly established himself as an important player at Old Trafford, although we have yet to see him at his best.

Ashley Young’s transfer to Inter Milan meant Ole Gunnar Solskjaer had to give to captain’s armband to someone else.

It has gone to Maguire.

Despite being a new player at the club, he looks the best choice and Keane largely agreed that it seemed like a sensible move from Solskjaer.

Dream come true to be named the @manchesterunited captain. Proud moment and huge honour. Just want to wish @youngy_18 all the best at @inter 👏🙌©️#mufc

Keane aimed a dig at the recent of the squad, though, as he said he feels this move doesn’t say a lot about the leadership of those who’ve been at the club longer than Maguire.

They may not like it but Keane is spot on.

We’ve argued for too long that the United dressing room lacked leaders to take responsibility.

Speaking on Sky Sports today, as quoted by the Metro, Keane said: “I’m always concerned when a new player comes to the club and is given the captaincy.

“To me, it doesn’t say a lot about the other senior players at the club.

“But he’s an experienced player. He’s a good age, he’s obviously going to be a regular in the team and he comes across a pretty decent lad.”