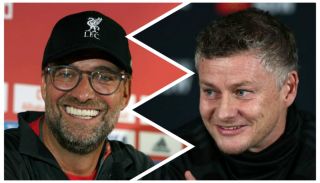 Liverpool manager Jurgen Klopp has talked up Manchester United ahead of the big game this weekend.

The German has labelled the Man Utd squad as one of Europe’s best.

Considering we’re in the Europa League and not even in the Premier League’s top four, we’re taking his comments with a pinch of salt.

And Klopp is likely to be using the fact Liverpool are the reigning Champions of Europe as a way to rub salt in the wounds of United. He claims United have a squad full of match-winners which doesn’t add up because most of us are concerned ahead of the game with the likely absence of Marcus Rashford…

The question is — is Klopp being complimentary or having a joke at Liverpool’s rivals?

‘They have recruited some exceptional players and the evolution of their squad makes them one of the strongest in Europe, I would say,’ he commented in his programme notes (via Football365).

‘Look at their talent from the ‘keeper through to the forwards. They have world-class talent in that team and a squad full of match-winners. Big investment has resulted in a very strong group.

‘United compete in four competitions still — this says a a lot about their quality. They remain with much to fight for in the league, a semi-final second leg to come in the Carabao Cup, into the fourth round of the FA Cup and the knockout stages in Europe. You cannot compete as they do in these competitions if they are not an outstanding football team.’

There is a lot of respect shown here by Klopp, and you can tell a number of Liverpool fans won’t agree with his assessment of United.

Rashford was not listed in the match day squad (via Manchester Evening News) which is a huge blow for the Red Devils today.

To be playing our arch rivals, Liverpool, without our best player will only make matters more difficult.