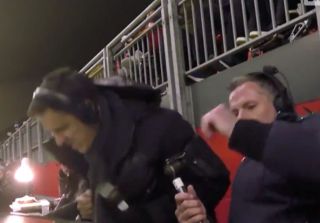 Anthony Martial missed a big chance to equalise against Liverpool.

The France international found himself in the Liverpool box, played in by a beautiful pass, and then blew his chance over the bar.

He wasn’t composed enough and rushed his shot.

You would usually expect Martial to put a chance like the one below (football via Sky Sports) but he misfired.

Anthony Martial blazes over from close range after finding space in the Liverpool box!

This was met with an angry reaction from former United player Gary Neville.

Neville jumped off his seat and punched the desk as Martial wasted his chance on goal by sending it over the bar.