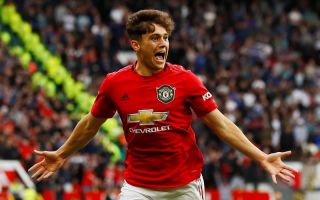 This may be the usual nonsense that does the rounds before a big game, but the Red Devils have done well against the top six teams in the Premier League, beating both Tottenham and Man City in the space of a week before Christmas.

The young Welsh international has won over fans at Old Trafford this season with some brilliant performances. He wasn’t expected to play so often this season but James settled in quickly and looks a really good prospect for the future.

Fans will enjoy his recent comments.

‘We are Man United — and we don’t go anywhere feeling like we are going to lose,’ he’s quoted as saying by the Metro.

‘It is going to be a tough game, but we go into it feeling very positive. We are the only team to have taken points off Liverpool this season, so we will go there full of high hopes. It has always been like that. Since day one here, you realise that we don’t go into any game as the underdogs.

‘Everybody is going to be ready for Liverpool. Whoever is picked will be ready to step up. It will be a case of doing exactly what we did against them last time.

‘Everyone performed really well, worked hard, and in the end we were unlucky to only get a draw when they scored in the last five minutes. Like I say, we know how hard this game will be, but I am really looking forward to playing in it. I’ve never played at Anfield before – but we go there with no fear.’

We have got to accept that United raise their game for these fixtures now, the same way Liverpool used to when we were winning Premier League titles under Sir Alex Ferguson, and today that’s fine as long as we come away with something.

It’s always hard to take, but a defeat against Liverpool today would leave a 30-point gap between the two of us in the league table, and that makes us sick to the stomach.

The draw at Old Trafford was the only game that Jurgen Klopp’s side didn’t win in the PL this season, though they have yet to face West Ham (not that they will make a difference to that!), and today we want to go one step ahead.

We should have beaten them earlier in the season.