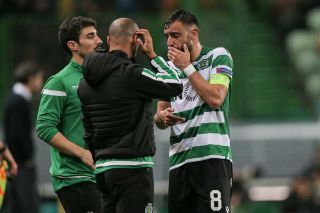 Sporting Lisbon manager Silas commented on the 2-0 home defeat in the derby against Benfica, and addressed the possible departure of star player Bruno Fernandes.

They have a Taça da Liga cup clash coming up against Braga on Tuesday and Silas claims he will prepare for the game with Fernandes should be still be a Sporting player then.

When asked if Fernandes will be in the squad for their next game, Silas told Ojogo: “I don’t know. At the start I think so. I’m going to prepare for the game with Bruno, now from then on I don’t know what will happen. He is a player who aspires to play in a league superior to ours. What player would not like to play in the English League? It is difficult to tell him “don’t go”. Bruno deserves to try a league like this and the best one really is. If he is one of the best, he has to be there.”

This sounds like the manager accepts Fernandes will leave but it comes down to Manchester United and Sporting Lisbon finding an agreement that suits both clubs.

The Red Devils are crying out for a midfielder like Fernandes, who last night produced an exceptional pass that Marcus Rashford and Anthony Martial would love to feed on.

Silas was also asked how Sporting will cope without Fernandes when he eventually leaves the club.

We are getting excited about the arrival of Fernandes, but the prospect of Ed Woodward messing up the deal is likely given his track record in the transfer market.

He will try to penny-pinch like he does with every deal, dragging it out for too long when Ole Gunnar Solskjaer could do with additions as soon as possible.

Updates when we have them.