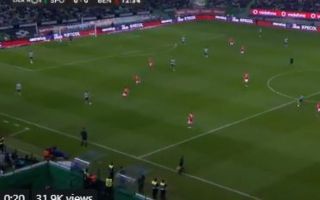 We are still waiting on confirmation to see if Bruno Fernandes will make his much anticipated move to Manchester United but if he does, you can be sure this isn’t the way he would want his Sporting Lisbon career to end.

They lost 2-0 to rivals Benfica in a game many outlets have suggested as Fernandes’ farewell. Sky Sports claims last night was like a goodbye to the fans of Sporting ahead of his switch to Old Trafford.

Obviously this isn’t much of a consolation to him, but he did produce a moment of magic when he played a glorious pass that took out the entire Benfica defence.

This moment shows why Fernandes could be a great addition for Man Utd.

What a pass this is from Bruno Fernandes tonight. 60 yard through-ball with perfect precision #mufc pic.twitter.com/hBrcI06Krv

Too often we take our time moving the ball forward and lack that incisive pass. With the movement and pace at Old Trafford — with Marcus Rashford, Anthony Martial, Mason Greenwood and Daniel James — these balls could be devastating for opponents.

We’ll keep track of any updates on Bruno Fernandes over the weekend.