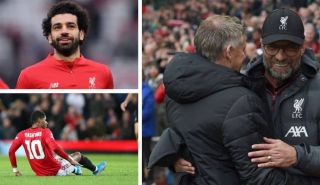 Jordan Chamberlain is editor of popular Liverpool blog Empire of the Kop. He has kindly agreed to answer several questions ahead of this weekend’s mammoth clash at Anfield.

Sadly, the tables have turned for now. Liverpool are seen as one of the best teams in Europe and look set to clinch their first league title in 30 years. United, on the other hand, are scrapping for top four finishes each season and are currently in the Europa League.

It won’t stay that way forever (hopefully) and we won’t be happy for however long it lasts.

Of course, a big thanks to Jordan for his answers.

Confident the league is wrapped up?

Not ’till the red ribbons are on the trophy am I going to start saying silly things – but, it’s looking pretty good so far.

What is it about United that we are the only team to take points from your lot this season, in the league? A game we should’ve won.

Liverpool had 68% possession, 10 shots to 7 off-target and 4 shots to 2 on target. We also had a goal disallowed offside for a matter of inches while United’s could have been ruled out for a potential foul in the buildup on Origi. At the end of the game, United were hanging on for dear life. It is absolutely nonsense that you should’ve won. But to answer the odd question, Mo Salah was injured.

James Robson of The Standard argued earlier this week that Rashford would start in Liverpool’s front three. Tell us who misses out?

Ask James Robson! I’m not sure Jurgen Klopp would agree. Rashford is really good, and actually the player I fear most – perhaps in the entire Premier League. He always fizzes against us. But I find these combined XIs nonsense. Danny Ings has more goals than Saurez and Griezmann this term – does he get into Barca’s team? If Rashford arrived this January he’d be a very good first-sub for the time being.

What do you make of Man City’s defence of the Premier League title after all the money Pep Guardiola has spent?

They’re still really, really good. They’ve scored 62 goals already. They’re on course to hit just below 90 points, which has won the Premier League time and time again. At the end of the day, Liverpool have won 20 of 21 games so far. It’s not been done before. It might not continue, but the story is not City being bad, it’s Liverpool being almost perfect.

How much does the prospect of Rashford missing Sunday’s game influence your feelings ahead of the game?

As mentioned before, I really hope he doesn’t play. He’s brilliant. So, he’ll be a big miss.

What will Klopp’s big plan be this weekend?

Press early on, use the crowd, score, control the game until half-time and add goals in the second when United have to push. Doesn’t always work, of course – but at Anfield – it usually does. The game will have the familiar feel of every match between Liverpool and United for the past few years: high-line possession side against deep-line counter-attack side.

And finally, do you remember the last time Liverpool won the league?

I’m thirty in February. So, I was alive, just about! You remember the last time you didn’t want to poke your eyes out watching your football team? Good luck!