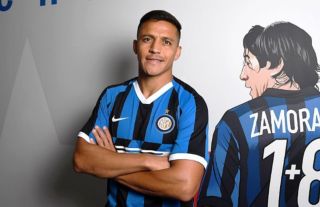 Alexis Sanchez’s transfer from Arsenal to Manchester United was a disaster. You can’t look at it any other way.

The Chile international was outstanding for Arsenal and his move to Old Trafford felt like it might have a similar impact to Robin van Persie’s switch to the North West. It was sad to watch as Sanchez struggled for fitness and form during his time in Manchester.

Only Sanchez knows, if he’s being totally honest with himself, if he was burned out or why he couldn’t meet his high standards at United, but it seemed pretty clear he didn’t have a future there after Ole Gunnar Solskjaer took charge.

The manager showed trust in younger players after the coach before him, José Mourinho, regularly picked Sanchez over Anthony Martial.

And there is no doubting that Man Utd have been better with Martial than they had been with Sanchez.

A report from the Telegraph claims that the Inter Milan players are keen to see him stay on a permanent basis, but his £400k-per-week salary at United could be an issue.

Could? I should say ‘will definitely’ be an issue.

United are still paying a significant portion of Sanchez’s wages even though he’s out on loan, so the sooner we get rid of him the better!

He’s been out for a few months so a lot will depend on how well he does in the second half of the season.

Ashley Young’s January move to Inter will see him reunite with Sanchez as well as Romelu Lukaku.