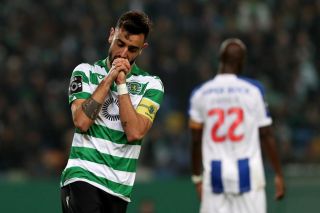 Ole Gunnar Solskjaer was again coy when asked about Bruno Fernandes in Friday’s press conference ahead of Manchester United’s trip to Anfield to face Liverpool on Sunday.

Fernandes has been heavily linked with a move to Old Trafford this month, with the Reds renewing their summer interest in the Sporting Lisbon captain.

The latest from James Ducker of the Telegraph is that Fernandes has agreed personal terms with United, but as of yet not fee has been agreed between the two clubs.

Fernandes is expected to play for Sporting this evening in the Lisbon derby against Benfica.

Portuguese outlet Record, as sourced by the Daily Mail, claim that this will be the last game Fernandes features in for Sporting and he will say his goodbyes before completing a move to United.

The report suggests Fernandes could even be in the stands at Anfield to watch the Reds on Sunday.

However, Solskjaer remained tight lipped when asked about Fernandes this morning.

“I can’t tell you about any players that play for other teams, no,” Solskjaer said, as quoted by Manchester Evening News.

“We’re focusing on this game and that’s my only concern.”

United fans are desperate for the club to get this transfer over the line and there is now under two weeks remaining in the window to complete the switch.

Fernandes offers exactly what Solskjaer is missing; a player of genuine quality that can link midfield and attack that also boasts an outstanding goal record.

The 25-year-old scored 32 goals in all competitions last season, a hugely impressive record for a midfielder.