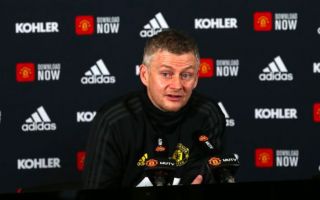 Ole Gunnar Solskjaer says Manchester United are working hard to ensure they do have a similar title drought to arch-rivals Liverpool.

Jurgen Klopp’s side are on course for their first title in 30 years and United face the runaway league leaders at Anfield on Sunday.

Solskjaer’s side meanwhile, sit in fifth position, a staggering 27 points behind Liverpool after 22 games have been played.

United have fallen drastically since Sir Alex Ferguson’s final title winning season due to a combination of poor recruitment and management decisions at board level.

Solskjaer has a huge rebuild on his hands if he is to be the man that gets United back to competing domestically, but he insists Liverpool’s drought can be a lesson for United.

“That’s what we’re working hard to make sure doesn’t happen,” Solskjaer stated in Friday’s pre-match press conference, as quoted by the Mirror.

“And let that be a lesson for us that we can’t let ourselves go another 24 years until we win the league and I’m sure we won’t.”

“I believe in this club, I believe that we are rebuilding now, we’ve started something that’s going to take a little bit of time but we’ll get there.”