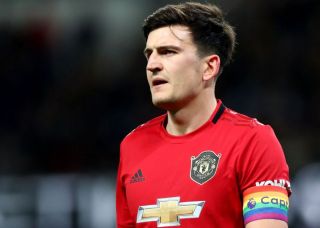 Maguire has instantly become a leader at Old Trafford since signing from Leicester City this summer.

He is an established first-choice England international and one of the most experienced players in the United dressing room, so it’s no surprise to see the defender being handed the captaincy.

Maguire has already worn the armband in Young’s absence this season, and will take the reign as club captain from the 34-year-old.

As reported by BBC Sport, Young is expected in Italy for a medical on Friday ready to complete his transfer to Inter Milan.

Young, 35 in the summer, will reunite with former United teammates Romelu Lukaku and Alexis Sanchez at Antonio Conte’s side.

Many United fans have been having their say on Maguire being selected as captain on social media.

Maguire was the obvious choice for Solskjaer and will lead the Reds out at Anfield on Sunday against runaway leaders Liverpool.

United have had seven captains already this season, but now they have a club skipper who will start every week the captaincy roulette should come to an end. Solskjaer clearly impressed by Maguire's leadership, in public and in private, at United #mufc

Hope this is the making of Harry. He could be a great captain but I do think this illustrates our lack of leaders at the club. https://t.co/KUMTa2HWRF

Harry Maguire named Man Utd captain. All things considered, it’s the right choice. Let’s hope at some point (way in the distance!), in his time as captain, he lifts the PL title for us. #MUFC pic.twitter.com/pP7rYsUg05 #mufc #ManUtd

Harry Maguire should never captain a team in which DDG plays in. Sad

The only contention I have against Maguire being captain is the disrespect to De Gea.

Otherwise, don't get it twisted, he's our best leadership choice.

Go through the starting 11 and find me a captain apart from Maguire:

De Gea: had it before, form dropped.
Williams: no
Lindelöf : no
AWB: no
Fred: no
Mctominay: potentially, but too young.
Pogba: he wants out/ doesn't play enough
Rashford: next best fit
Martial: no
James: no

Unlike Ashley Young and Ryan Giggs, Harry Maguire is a solid Captain alongside the likes of Vidic, Rooney, and Keane. Those yapping about De Gea should realize it takes viciousness and madness to make a top captain. Vidic was a mad dog, Keane was a wolf! #mufc pic.twitter.com/BHA7WZcgnF