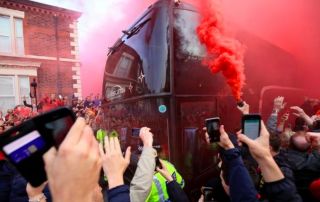 Liverpool fans are planning a hostile welcoming for Manchester United at Anfield on Sunday.

A fan account for the runaway league leaders has urged supporters to line the surrounding streets of Anfield before kick off to greet the United team bus upon its arrival.

Similar receptions have been given to Manchester City and Barcelona in the last couple of years.

Liverpool were handed a £17,500 fine by UEFA in 2018 after damaging the Man City team bus by throwing beer bottles through the windows.

And the fan account suggested fans should bring ‘pyros, pints and flags to show their arch rivals what this means’.

United’s players should be accustomed to hostile receptions and atmosphere’s and won’t be fazed by events that take place outside of the stadium.

The real challenge is on the pitch where Ole Gunnar Solskjaer’s Reds face a side that has dropped just one point all season.

A reason for cautious optimism is that it was indeed United to take this point off Jurgen Klopp’s side in a 1-1 at Old Trafford, but the Reds have a serious uphill battle at Anfield, especially given the key injury setbacks.

Share this around reds!🔴 — We all know how much this game means to us!🔴United will want to stop us more than ever as we continue our unbelievable season and our hunt for the title. Get down there early to welcome the boys in and make it as hostile as we can for them united players. Villarreal, Man City, Barcelona, Dortmund, they’ve all crumbled when we’ve created this kind of atmosphere. Let’s do it to united and continue to help this team make history! Tag a mate who you want to go with!🔴🔴🔴 (Lets make this hostile, NOT VIOLENT) #LFC #YNWA