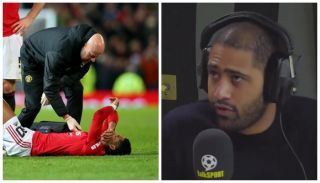 Former Liverpool defender Glen Johnson was not impressed with how Ole Gunnar Solskjaer and the medical staff handled Marcus Rashford last night as the Manchester United forward came off the bench only to be forced down the tunnel shortly after with a knock.

The initial plan saw Rashford named on the bench for Man Utd’s FA Cup replay against Wolves, but with the game goalless after half-time Ole Gunnar Solskjaer decided to bring the forward on to replace Daniel James.

Rashford wasn’t on the pitch very long when Mike Phelan ordered that he should come off, with the big game on Sunday against Liverpool.

Solskjaer admitted after the game that the call to bring on Rashford backfired.

Now Johnson has weighed in on the debate and has hit out at United for their handling of the situation, as per talkSPORT:

“It’s the sort of injury which looks like a burnt out injury.” 🩹

“They made a huge error by bringing him on.”👎

“The backroom staff should look after him better.” @Glen_Johnson says #MUFC made a huge error by bringing on Marcus Rashford last night. 🔴

It will be a huge loss if United are without Rashford on Sunday.

The England international has played lots of football this season and could be close to burning out.