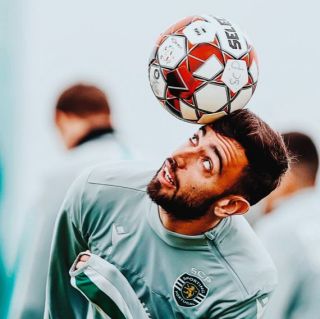 Bruno Fernandes has continued to train with Sporting Lisbon over the last few days, despite the links that suggest he is ready to complete a transfer to Manchester United.

Many United fans were thrilled when widespread reports last week broke the renewed interest in the midfielder, with a hope that the Reds could secure his signature in a short space of time.

Unfortunately, a deal is seemingly yet to be agreed between the two clubs, but the Telegraph reports that Fernandes is keen on a move to Old Trafford.

READ MORE: Report: Bruno Fernandes could be in stands at Anfield for Liverpool clash

And according to Portuguese publication Record, via the Daily Mail, Fernandes is preparing for his goodbye fixture against Benfica in the Primera Liga on Friday.

The report claims Fernandes would then travel to England and could be in the stands to watch the Reds take on Liverpool at Anfield on Sunday.

We have heard reports of a similar nature in the summer, so we will wait for more confirmation before fans can really get excited about the possibility of Fernandes in Ole Gunnar Solskjaer’s midfield.

Stop teasing, get that Contract signed

See you in Manchester soon. 🇾🇪

The ball has red on it. Bruno Fernandes to United confirmed.

En route to Manchester, confirmed by the red football, see you Friday after Benfica Bruno 👀🔴 pic.twitter.com/NMSHBdznpG

See you next week mate 👍

Currently, 45.9K followers, lets see how many followers increase after the announcement 😜 #MUFC